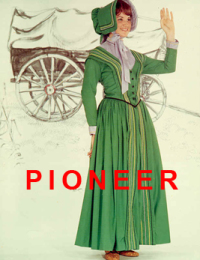 Note: There is conjecture as to the family name of Jessie/Jessy. There is considerable amount of circumsta…

There is conjecture as to the family name of Jessie/Jessy. There is considerable amount of circumstantial evidence that her family name was Moffatt/Moffitt. For example, this is an additional personal name inscribed on her headstone. Variations of Moffatt are used in various personal names of some of Jessie's descendants.

I have not seen any record older than the record of Jessy, John and their three children arriving on board the "Coromandel" in 1838. This record includes the information that Jessy was a native of Kelso and the daughter of John and C...... Purbur [I think!] of the same parish .......... These records were indexed years ago by members of the Church of Latter Day Saints and the transcriber at that time transcribed the family name as Purbur.

This shipping record is difficult to read but the family name written does not look like any variation of Moffatt.

If anyone can provide any guidance on this matter it would be very much appreciated. The marriage record of Jessy's parents would be very useful.